Lifehacker have been running a “How I work series” which has given an interesting look into how their editiors work on a day-to-day basis.

Well time for me to blatently rip off the idea :)

I challenge all of the Westcoastbloggers to answer the same questions on their blogs.

What desktop software do you use every day?

I’m still an Outlook user. Originally I used it because it sync’d with my PocketPC nicely, now it is just because I like it. I occasionally use Thunderbird on Linux.

I will often have a copy of either notepad (Microsoft’s BEST program – ever!) or notepad2 open. Notepad2 supports colour highlighting and UNIX line endings, so fills the gap nicely when notepad won’t cut the mustard. Unfortunately it doesn’t support ruby yet :(

I use Illium’s eWallet for password management. It is almost always open so I don’t have to remember all of my clients passwords. Also sync with my PocketPC so I can access stuff away from my laptop.

The command line utility NCFTP is my trusted FTP client. I started using this on Linux and fell in love with it, so I jumped at the changed to use it when the windows version came out.

If I’m text editing on Linux, I use VIM. There is a Windows version, but notepad is easier.

I use PuTTY to SSH in to the various servers that I work on. Since I work on a development server and I use Subversion for version control, this is a must have.

Although I try to keep this closed whereever possible, I use FeedDemon 2.0 for my RSS feeds.

What web sites do you use every day?

I always have my time tracking system, 88 miles open in a firefox tab

I frequent the port80 forums.

It goes without saying that Google gets fired up many times a day.

I have a Compaq iPaq, but don’t use it that often anymore. I used to use it mainly for time tracking, but now I use 88 miles. I have a big A4 paper diary in which I write meetings, todo lists and reminders for the next day (I’m more likely to read them in there as it is always right in front of me). If I’m out I will take my PDA because it is a bit smaller than my paper diary. I’m trialling Remember the Milk as a task list manager. Although I still seem more inclinded to write stuff down on paper. 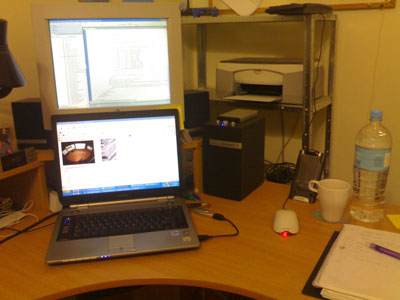